When I enrolled in my first college class as a special education major in the Fall semester of 1978, it was with both the excitement of a pioneering adventure and apprehension of the enormity of the task.  Excitement because only a few years earlier (1975) the landmark Public Law 94-142 had been passed and the field of special education was growing in leaps and bounds. 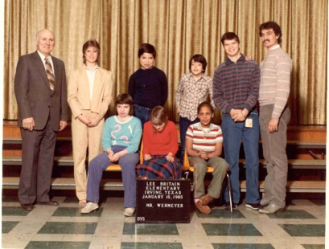 Apprehension because—well, because there was so much to do.  PL 94-142—now known as the Individuals with Disabilities Education Act—opened the school doors for literally thousands upon thousands of children and youth with disabilities who, prior to that Act, were denied a free public education in most places in the country. I began my teaching career in 1980 and throughout that decade can remember adolescents coming to school for the first time in their lives.

In 2015, I had the privilege of speaking at the U.S. Department of Education’s celebration of the 40th Anniversary of IDEA.  It was a time to reflect, to admire the journey, to celebrate the progress, and to take stock of what remained to be done.  In other words, it was a time of excitement to celebrate the impact of that landmark Act, and a time of apprehension about  the enormity of the task that remained.  Yes, there was much accomplished in that 40-year span, and we must not take for granted what has been achieved nor forget those who worked so hard to get us to this point.  Yet, there is still much to be done.

On July 1 of this year, I had the honor of becoming the chair of the KU Department of Special Education.  I do so with a sense of both—well, you guessed it, excitement and anticipation.  Excitement for the innovations that will result from the research, teaching, and service from our internationlly-renowned faculty.

Excitement for the opportunity to interact with world-class doctoral and graduate students.  Excitement for the growth of the highest quality online graduate programs in the country.  Excitement for the opportunity to work with alumni who are changing the field and friends of the department who support our efforts.  Excitement to work with teachers and administrators and students in schools across Kansas, the U.S. and, indeed, the world.  We are uniquely positioned to lead the field into whatever is next. In fact, it is what we do… we lead the field in new directions.  Dr. Elizabeth Kozleski has provided exceptional leadership to the department and we are stronger as a result.   Anticipation?  Well, we are not the same faculty I joined in 2001.  Many of those pioneers have retired and started new adventures.  We, as a faculty, need to create our own identity, forge our own path, and build on the legacy that we have inherited.  The challenges are, in some way, more difficult.  The easy problems in education have been solved, what are left require partnerships, creative thinking, and elbow grease.  And yet… there are few, if any, departments better situated to take on these tasks:  To generate the next big idea that changes how students with disabilities are educated;  to train the next generation of leaders in research and practice; to influence policy that leads to full citizenship for all.  It is what we do… we lead the field in new directions.  I look forward to working with you in whatever role you have in our department as we start this part of the department’s journey.

Michael L. Wehmeyer, Ph.D., is the Ross and Marianna Beach Distinguished Professor in Special Education and the chairperson in the Department of Special Education at the University of Kansas.  He is also Director and Senior Scientist for the Beach Center on Disabilty at KU.

Elephants, American Indians, and the Circus

Elephants, American Indians, and the Circus

My mother collected elephants, bronze, ceramic, silver, large and small urns shaped like elephants, and even a belt with the silver images of marching elephants.  After she died in 2003, my brother and I were going through her things and dividing the mementos that we each wanted to keep.  I chose her elephant collection.  Today the yellow, or gray, or silver elephants of all shapes and sizes rest in various places nooks and crannies in the house that has been passed down from my grandmother, to my mother and now me.

Until I began the research for my novel Mike Kings: An Indian Baseball Story (Aunt Lute Books, 2007) set in Ada, and later research for our new play, Side Show Freaks and Circus Injuns, co-authored with Monique Mojica, I had no idea why my mother was drawn to elephants.  But it seems that circuses and elephants loomed large in the minds of American Indians in southeastern Oklahoma, and certainly in my mother’s imagination.  Small and intermediate-sized circuses began coming to Ada, Indian Territory, as early as the 1890s.  The Ada Weekly News began writing about the circus in Ada in 1904.

When circuses came to Ada, they always parked in Daggs Prairie about six blocks from my grandmother’s house.  My mother and my great aunt Euda and their friends would always sneak in the backside of the circus tents and watch the elephant, tiger and bears that were part of the circus acts.  Sometime around 1929 my great aunt Euda joined the circus, and she traveled all over the world as a circus performer.  Euda was only a few years older than my mother, and the two looked like sisters and remained very close until their deaths.

Over the past seven years I’ve been working with indigenous actress and playwright Monique Mojica, and others on an indigenous research project for our 70-minute play about mounds, mound building and theatrical performance.  Both Monique and I had family members that were in the circuses.  Our play involves developing new Indigenous performance models based dramaturgically on Indigenous cultural texts: earthworks. Indian Mounds were built by layering different kinds of soils one upon the other. As Indigenous playwrights Monique and I will employ the deep structure of earthworks as dramaturgical models. Our soil layering will be represented in the stories we “layer in the play” with circus acts and our two principle characters, Panther Girl and Invisible Woman. We began our research at mound sites by asking a simple question: How do Natives embody the lands of their origin? To help with our research we talked with tribal elders and residents in Native communities in close proximity to mounds, and we visited mound sites from Canada to Louisiana, and read historical documents.

What we found was that in the 19th and early 20th centuries, modern circuses parked on mound sites.  Why mound sites is a little unclear, but one guess is because the sites were ready made for the circus tent.  I’ve since wondered if my great aunt Euda had played Indian on any of these mounds sites.

The Western Hemisphere is populated with mounds and earthworks in various ages from the Archaic, Early Woodland, Middle Woodland, and late Woodland/Mississippian periods. In the Southeast some of the great mound cities are Poverty Point (Louisiana), Moundville (Alabama), Nanih Waiya (Mississippi), and Okmulgee (Georgia). Other earthworks known as Hopewell era sites are located across Ohio and the Ohio Valley. At one time, hundreds of thousands of mounds, including embankments, conical mounds, platform mounds, and effigy mounds, dotted Indigenous North America, beginning as early as 4000 BCE. The very name “Turtle Island” connotes a vast effigy mound rising out of the water.

In studying mounds as Indigenous literatures, we asked other questions. Are the earthworks embodied mnemonics aligned with moon and sun rotations to show future generations of Natives when and where to converge at specific sites? Another indication of the return motif.  One thing is certain, the circus always returned to Ada to perform for two weeks at a time, as if following in the footsteps of indigenous people who designed “return elements” via cosmic alignments at all these mound sites in Native north America.

Today at Hugo, Oklahoma, located within the Choctaw Nation of Oklahoma, is Showmen’s Rest, Circus Cemetery for all the “showmen under God’s big top.” Indeed, it’s a graveyard of circus performers of ages past. You will note the elephant statues that graces the graves of past circus performers. Hugo, the second oldest Choctaw town in Indian Territory, now Oklahoma, has been a “popular winter headquarters for traveling circuses, earning the nickname “Circus Town, USA,” according to Hugo’s website.

In finding out so much of the history of the circus that came to town and enticed my family members to join it has been a joy and a sorrow.  A joy because they were brave people to uproot themselves.  A sorrow because I should have asked more questions when my mom was alive: “Why did you collect elephants, Mama?”  In writing this play, I think I’ve found the answer.  But I’m sure there is more to the story.

LeAnne Howe is an enrolled citizen of the Choctaw Nation of Oklahoma. She writes fiction, poetry, screenplays, creative non-fiction, plays and scholarship that primarily deal with American Indian and Native American experiences.

Her first novel Shell Shaker (Aunt Lute Books, 2001) received an American Book Award in 2002 from the Before Columbus Foundation. The novel was a finalist for the 2003 Oklahoma Book Award, and awarded Wordcraft Circle Writer of the Year, 2002. Equinoxes Rouge, the French translation, was the 2004 finalist for Prix Medici Estranger, one of France’s top literary awards. Evidence of Red (Salt Publishing, UK, 2005) won the Oklahoma Book Award for poetry in 2006, and the Wordcraft Circle Award for 2006. Her most recent novel is Miko Kings: An Indian Baseball Story (Aunt Lute Books, 2007). Her latest two books Choctalking On Other Realities (Aunt Lute Books), a memoir, and Seeing Red Pixeled Skins, American Indians and Film (Michigan State University Press), a co-edited anthology of film reviews were both published in 2013. She is the Eidson Distinguished Professor of American Literature in the English Department at the University of Georgia, Athens. She is available for readings and lectures at colleges and universities.

She is now working on an Irish Choctaw Chapbook with Irish poets Doireann Ní Ghríofa and Padraig Kirwan about the 1847 Choctaw gift to the Irish for famine relief.